Have the best gut to go on

Start your free 14-day trial today to improve digestion, boost immunity, and reduce cravings with NuCulture - the probiotic of the future.

Get Free Shipping on NuCulture Now 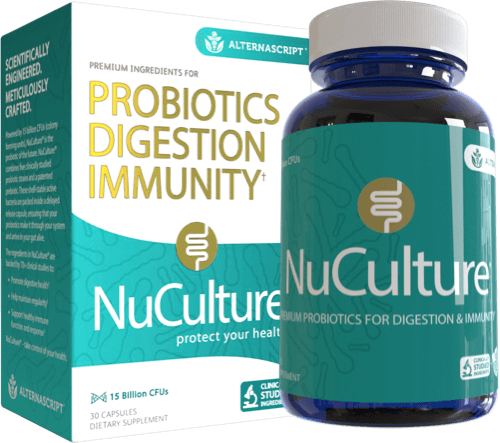 A healthy gut could be the key to feeling your absolute best. Probiotics can help balance your "good" and "bad" bacteria to keep your body working like a finely-tuned machine.

You probably consider yourself a health conscious person. You bust your butt in the gym, eat the right things, and try to get as much rest as possible- but I bet you feel like you’re still falling short? And after working all day, the energy to search for a legitimate alternative just isn’t there. I feel your pain because I used to be in the same place. Even if I did a million squats and drank three acai berry smoothies everyday, I still wouldn’t feel the way I wanted to feel. There was a major piece of the picture I was missing, that was leading me to feel sluggish and not at the top of my game.

It all started in my gut.

By now, unless you’ve been stuck under a giant boulder in the himalayas for the last few years, you’ve heard of probiotics. Probiotics are live bacteria and yeasts that are great for your health, particularly your digestive system. Unlike the bad bacteria that can cause illness and other diseases, probiotics are good bacteria and fundamental to maintaining a healthy body. However, it’s difficult to get enough probiotics from food alone. If you want to maintain optimal health and feel great you have to take good bacteria in the form of a probiotic supplement.

"The brain isn't the only place in the body that's full of neurotransmitters. One hundred million neurotransmitters line the length of the gut; approximately the same number as in the brain." – Dr. Michael Gershon

I know what you’re thinking; the word bacteria doesn’t exactly conjure up thoughts of health and wellness. When you think of bacteria, you think of the stuff that causes diseases. So the idea of dosing yourself with a few billion a day is probably hard to digest—literally. But with scientific evidence mounting, we are beginning to see that probiotic supplements containing certain kinds of live bacteria, can boost your immune system and protect you from illness.

The most important bacteria that live in the small intestine are the Lactobacillus species. They can be found in foods like yogurt, kimchi, and sauerkraut. They also collectively ferment carbohydrates in the gut, producing lactic acid. Lactic acid helps create an acidic environment in the digestive tract, that discourages many unwanted microorganisms that thrive in an alkaline environment. Like the center on the basketball team protecting the paint, lactic acid increases absorption of calcium, magnesium, and iron.

Another very important bacteria are Bacteroides. Bacteroides, like other lactic acid producing bacteria, produce enzymes that assist in the digestion of lactose. They also improve the body’s ability to use calcium, phosphorus, and iron, and stimulates both gastric juices and gastric motility. This strain also supports vaginal health in women. One study showed that women who took Bacillus coagulans daily, saw improvements in their vaginal pH level, with 91 percent reporting relief from vaginal discomfort.

Your gut has a mind of it’s own

The enteric nervous system(ENS), often referred to as the “Second Brain”, is a densely packed collection of nerves which span your entire digestive tract. This system contains some 100 million neurons; roughly equivalent to the amount in the human spinal cord. They help control muscular contractions in the gut as well as the secretion of glands and cells. They also help balance hunger and the sense of being full.

So why is your gut compared to your brain, if neurons are found everywhere in the body? The reason this system is considered special, is because it’s capable of operating completely independent of the central nervous system. That’s right; Your gut can operate without your brain. There’s definitely something to the expression “Follow your gut.”

But unlike the brain in your skull, your Second Brain can’t help you pass your final or design a website.

“It's main role is controlling digestion, from swallowing to the release of enzymes that break down food, to the control of blood flow that helps with nutrient absorption to elimination,” says Jay Pasricha, M.D., director of the Johns Hopkins Center for Neurogastroenterology, whose research on the ENS has gained international attention.

“The enteric nervous system doesn’t seem capable of thought as we know it, but it communicates back and forth with our big brain—with profound results.” - Dr. Jay Pasricha

The Best Pros of Probiotics

About 80% of your immune system is in your gut so it's no wonder that probiotics can help boost your immune system. These little guys fight alongside of your immune system to wipe out harmful bacteria. They're so good that probiotics can even help relieve symptoms of irritable bowel syndrome, infectious diarrhea, some skin conditions, as well as aiding oral health. Taking a probiotic while on antibiotics can also help relieve symptoms like diarrhea. It's critical that you keep a healthy balance of bacteria though: 85% of the bacteria in your gut should be good bacteria, while bad bacteria should only make up to 15%. Dysbiosis is a term that refers to microbial imbalance or maladaptation on or inside the body, which can lead to autoimmune disorders. In other words, keeping a healthy balance by taking probiotics, is a great way to stave off illnesses.

Fact: There are thought to be 10 times more bacteria than cells in your body.

Approximately 100 trillion microbes, across over 500 different species, live in your gut. With numbers like that, of course they're going to have some pull, like influencing the food you crave. Research shows that some strains increase cravings for meat and starches, while other probiotic strains increase cravings for fresh veggies. Even more so, good gut bacteria help you break down food into absorbable nutrients and vitamins, so you’re getting more out of your food, and less empty calories. Now here’s the best part: Probiotics also produce B vitamins like folic acid and vitamin K, which help prevent vitamin deficiency due to poor diet, illness, or during pregnancy.

Probiotics have been linked to reducing system-wide inflammation, which may be at the root of many chronic illnesses. Also, when good gut bacteria become depleted through the use of antibiotics, a poor diet, an illness, or other environmental factors, probiotics can help to restore the balance.

Enhances Your Mental and Emotional State

Researchers have found that probiotics improve your cognition and sociability. It isn’t hard to believe, since I can’t name the last time I was in a good mood, while dealing with an upset stomach. Unbalanced microbes can lead to mood swings, anxiety, depression, poor memory and fatigue. In fact, 95% of the feel-good hormone, serotonin, is found in your belly.

Probiotics can also be of use in maintaining urogenital health. Like the intestinal tract, the vagina is a finely balanced ecosystem. The dominant Lactobacilli strains normally make it too acidic for harmful microorganisms to survive. Having healthy vaginal bacteria means less smell, irritation, and discharge. It also means protection against issues like bacterial vaginosis and urinary tract infections.

"The expectations of life depend upon diligence; the mechanic that would perfect his work, must first sharpen his tools." - Confucius

Chances are, if you’re reading this, you aren’t the type of person who just puts anything into your body. And why would you? You only get one. Unfortunately, finding the right probiotic for your body isn’t as easy as it should be. There are thousands of probiotic options out there, all with varying purpose and ingredients. So here are a few things to look out for when searching for a good probiotic:

How Many Strains Does it Have?

A probiotic is just another name for a strain of bacteria and different strains of bacteria offer different benefits. Lots of supplements offer just one strain, some offer several. If you want to simplify the process, look for a product with at least three strains.

Our probiotic, NuCulture, contains 5 clinically studied probiotic strains with 15 billion CFUs (colony forming units). Multiple strains will offer benefits specific to each strain and improve the ability of bacteria to colonize your digestive tract. As a leading creator in health innovation, we stand by all of our products. We’re so sure you’ll feel the difference, that we want you to have the chance to try the probiotic free for two weeks. We'll even cover the shipping.

Does it have Prebiotics?

Though probiotic supplements provide a ton of useful benefits alone, they have a greater effect when combined with prebiotic fiber. Most prebiotics are a type of insoluble fiber. Prebiotic fiber is found naturally in foods such as bananas, asparagus, garlic, and onions. Without a dietary source of prebiotic fuel, probiotic bacteria are unable to thrive as effectively. So look for a supplement that contains a range of prebiotic fibers. NuCulture probiotics has a revolutionary prebiotic that attacks harmful bacteria and feeds the beneficial bacteria, unlike standard prebiotic fiber.

Whether you’re looking to get rid of bloating, boost your immune system, or just better your health, a daily probiotic supplement can be your best friend.